Dogs are much more efficient in searching than we humans and their fine noses can easily distinguish jackal droppings from those of a fox or dog. Therefore, two sniffer dogs are specially trained for the golden jackal project in Austria – to search for prey. The loosen can give further information about the possible presence of golden jackals in the study area and further about the family structures of the animals. 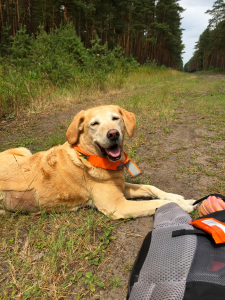 Molly is the senior in the round and an old “hand” at finding signs of presence. Since 2018 she has been in active use for searching clues (faeces, hair, urine, blood, tears) for wolf monitoring. In addition to her daily work in Saxony and Brandenburg, she has already been successfully deployed in wolf monitoring in Lower Saxony, Austria, Switzerland and Slovakia. Of course, she not only masters the target species wolf, but here much more excitingly, also the target species golden jackal and lynx. For all three species she performs a differentiated display and thus enables her handler Lea to distinguish the samples of the target species from each other already in the field. With her handler Lea, Molly has not only completed her Master’s degree in Wildlife Ecology and Wildlife Management, but has also run over hill and dale in the service of research in many an area. This well-rehearsed team does not allow itself to be easily disturbed in its search.

Summary of the results: 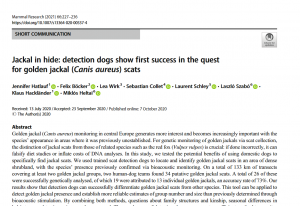 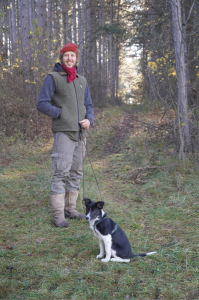 Stefan Knöpfer is a trained animal keeper, head of ORNITHOCLIMBING, ornithologist and since 2018 a certified detection dog handler. Since 2019, he has been working with his sniffer dog “Chilly” for Birdlife in the field of “Bird-crime”. The two search for bird carcasses; since 2020 also in collision monitoring under wind turbines in eastern Austria.

The Border Collie “Robin Hood” has been with Stefan since the beginning of November 2020. Early on, the puppy became interested in searching, as he witnessed it again and again during Chilly’s training missions. Of course, Robin Hood is still at the beginning of his training as a tracking dog, but Stefan has big plans for Robin: Herding and searching. Herding his own herd of goats and searching for animal carcasses as well as golden jackal scat! 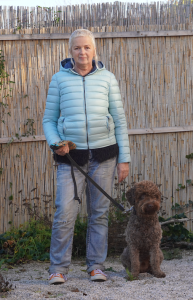 The Lagotto Romagnolo bitch Giorgina came to Doris six years ago. She comes from Italy and she was already trained to search for truffles, as both her parents are professional truffle hunting dogs. After a thorough training as truffle hunting dogs, Doris and Giorgina looked around for a new challenge and got to know NATURSCHUTZHUNDE – this was the beginning of an intensive and exciting time. Training and certification as a cadaver detection dog followed and since July 2020, the two have been regularly active for collision monitoring at wind turbines. As Giorgina prefers to spend hours in the forest, the search for truffles also remains an important part of their work together. The training to become a golden jackal tracking dog started in autumn 2020, the certification took place in May 2021 – and since both Doris and Giorgina as well as golden jackals “live” in the east of Austria, they can quickly be in the planned survey area for a future deployment. 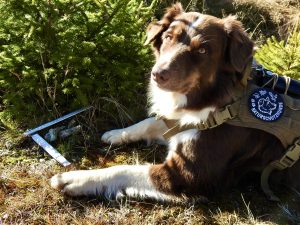 Heidi Kurz is a project worker at the Nature Conservation Association of Upper Austria, a freelance biologist in nature and species conservation and a nature mediator. Wherever possible, she is accompanied by her Australian Shepherd dog Grace (born in 2017). The breed-typical high “will to please” and the joy of nose work make it incredibly easy for the dog handler to inspire and motivate the bitch for search work for carcasses and scat of large prey grabs.

Since 2018, the certified human-dog team has been working on behalf of NATURSCHUTZHUNDE at home and abroad. Grace has so far been trained and tested in the target species wolf, lynx, wildcat and otter – and is now also searching for golden jackal scats for us!

Jägertagung 2018 - A talk about the golden jackal and the project was given at the "speakers corner".

Up to date with our new newsletter!

Poster Award! A poster presenting the current distribution of the golden jackal in Austria was awarded. more information

News from the study are! A new video is online! Click here for the video

Our website uses cookies and similar technologies. By clicking on “OK”, you confirm that you have been informed about this.

This website uses cookies to improve your experience while you navigate through the website. Out of these cookies, the cookies that are categorized as necessary are stored on your browser as they are essential for the working of basic functionalities of the website. We also use third-party cookies that help us analyze and understand how you use this website. These cookies will be stored in your browser only with your consent. You also have the option to opt-out of these cookies. But opting out of some of these cookies may have an effect on your browsing experience.
Necessary immer aktiv
Necessary cookies are absolutely essential for the website to function properly. This category only includes cookies that ensures basic functionalities and security features of the website. These cookies do not store any personal information.
Non-necessary
Any cookies that may not be particularly necessary for the website to function and is used specifically to collect user personal data via analytics, ads, other embedded contents are termed as non-necessary cookies. It is mandatory to procure user consent prior to running these cookies on your website.
SPEICHERN & AKZEPTIEREN